All Visits Will Be Made By Appointment Only

Your Health and Safety is Our Priority

Our Response to COVID-19

1931 - Mark had made his way to Chicago and begins providing for his parents at 11 years old.  At the age of 15 Mark bought his first used car for $50. Mark sold that car for $250 to a used car dealer by the name of Tex Sweetlove. Tex liked what he saw in Mark and hired him to buy cars for his dealership. Tex taught Mark the car business and soon Mark was buying and selling cars for himself.

1948 - After serving in the US Army as a celestial navigator and translator (he spoke five languages by this time), Mark opened his first one car used car lot on Cicero Ave in downtown Chicago. Mark would buy one car at a time and when he sold that car he would buy another one with the proceeds.

1957 - Mark decided to take the money he had earned over a 9 year period and build a used car dealership in the Chicago suburb of Arlington Heights. He named his new dealership Mark Motors.  When the building was complete, the Arlington Heights city manager walked in and advised Mark that the city was not zoned for used car dealers and the only way he could open for business was to have a new car franchise in conjunction with his used car operation. Mark quickly petitioned every new car manufacturer for a dealership and was rejected by every manufacturer except one, Studebaker.  The year was 1957 and Studebaker was probably only three years away from going out of business and they knew it. It wasn't unusual for Studebaker to issue a new car franchise to anyone who would agree to take it since sales were a challenge and the public’s interest in the vehicle was waning. Sure enough, Studebaker announced that they would cease operations and closed their manufacturing plant in 1960 and ceased operations soon thereafter. 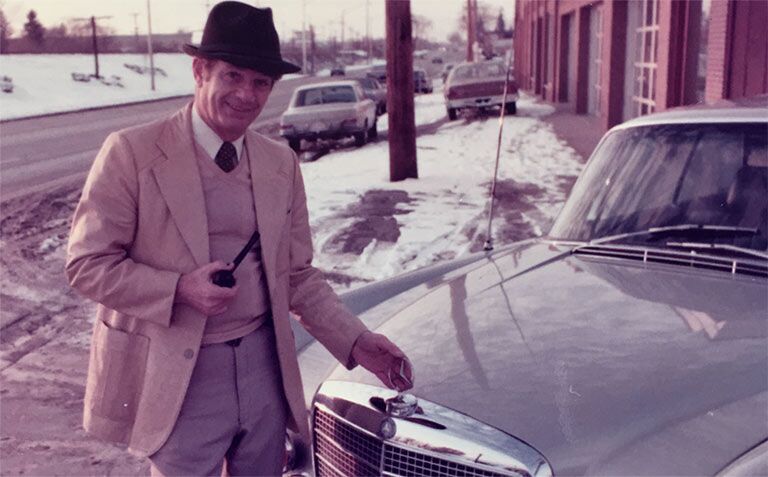 1959 - A company from Germany by the name of Mercedes-Benz was trying to build a dealer network in the US. Their first order of business was to begin to rent warehouse space from Studebaker in Indiana while a man by the name of Hanz Weiztineiger travelled the US in search of dealers who would be willing to represent the brand. Mr. Weitzineiger showed up to Mark's Studebaker dealership one night in what Mark later described as “a very large, unattractive black sedan.” Mr. Weitzineiger asked to speak to Mark and began to sell Mark on the Mercedes-Benz brand and the possibility that Mark become an authorized dealer. Mark proceeded to quiz Hans on the features and benefits of the vehicle. He asked if it had air conditioning, power brakes, power steering or even a radio. The answer to all of Mark's questions was no. Mark asked, "What do you ask for the car?" to which Hans replied, "$7,000." Mark said he was crazy and told him he wasn't interested (by way of reference, you could buy a brand new loaded up Cadillac for $2,950 at the time). Hans asked if he could leave the 1959 Mercedes 190D and if so, asked if Mark would take him to the train station. Hans told Mark that he had a meeting downtown and didn't want to pay for parking. Mark agreed to take him to the train station and put the black 190D in the back of the dealership where it sat for one year.

1960 - That year a man came up from Indiana to buy the 1959 black 190D Mercedes. The man gave Mark a check for $7,000 and Mark got in touch with Hans to let him know he sold the car. Hans came into the dealership to pick up the $7,000 check and gave Mark a check back for $700. That was the most Mark had ever made on a car and inquired what it would take to be a Mercedes-Benz dealer. Hans replied, "Buy $2,500 worth of parts from me and I'll make you a dealer." Well, Mark wasn't sure he could ever sell another Mercedes-Benz but he was sure that he needed a new car franchise to be able to sell used cars in Arlington Heights. So, Mark said yes, wrote Hans a check for $2,500 and became the second Mercedes-Benz dealer in the Chicagoland area.

1979 - Over the years, Mark sold a few new Mercedes-Benz while selling many used cars. Eventually, Mark also was granted a Chrysler dealership and was successful until 1979 when he voluntarily terminated his franchise to become an exclusive Mercedes-Benz dealer. Only carrying Mercedes-Benz was a risky proposition back in 1979 because the country was struggling from an oil shortage and experiencing a major recession. By going exclusively Mercedes-Benz, Mark began to focus on creating a better customer service model while simultaneously getting and selling more and more Mercedes-Benz.

2002 – Mark was told by the manufacturer that it was time to move his dealership to a new location. Around this time, Mark's son Ron started to fly to Chicago from San Antonio every week to help with the dealership. Mark was 82 years old and Ron knew his dad needed some help running the day to day operations. As Ron looked for property to build the new MB dealership in the Chicago suburbs, he soon discovered that everywhere he went, the new store interfered geographically with every other MB dealer's territorial rights. Frustrated, Ron proposed that MBUSA allow him to move the MB franchise to Boerne, Texas, while granting them the right to sell the MB store in Arlington Heights to a qualified dealer. Ron asked for his father's permission to move forward with the sale and Mark said yes. This was no small decision on Mark's part since he had been at the same location in Arlington Heights for 45 years. When it was time to sell the dealership in Arlington Heights, Mark was asked to sign documents that he was too old to read. Mark looked at his son and said, "I can't read what I'm signing, but if you tell me to sign it, I will." Ron assured his dad that it was the right thing to do and Mark and Ron moved forward with the sale. Ron bought 23 acres of property in anticipation of being granted his wish of moving the franchise.

2005 - MBUSA granted Ron, his sister, Marka, and his brother, Larry, the right to relocate to Texas, and on May 24th, 2005, Mercedes-Benz of Boerne opened its doors for business. Mark got to see the new dealership towards the remaining few days of his life and as he stood in the showroom with a tear in his eye said, "From my little hamburger stand to this!" Mark was pleased and proud to have been the patriarch of what became a second generation of Mercedes-Benz dealerships in the family. Ron was joined by Bill Bird, and together they managed and operated MB of Boerne until 2014.

2017 - Ron and Bill added Jeff Ahlfors as a full partner, and together they set out to build a luxury preowned dealership designed to deliver the very best service in the industry. After careful thought and consideration, they chose the name Mark Motors in honor of Mark for whom without his tireless efforts and constant steady course, none of this would have been possible.

Welcome to the new Mark Motors where our commitment to you, the customer, is the same as it was when Mark opened the original Mark Motors back in 1957!