Your Health and Safety is Our Priority

Our Response to COVID-19 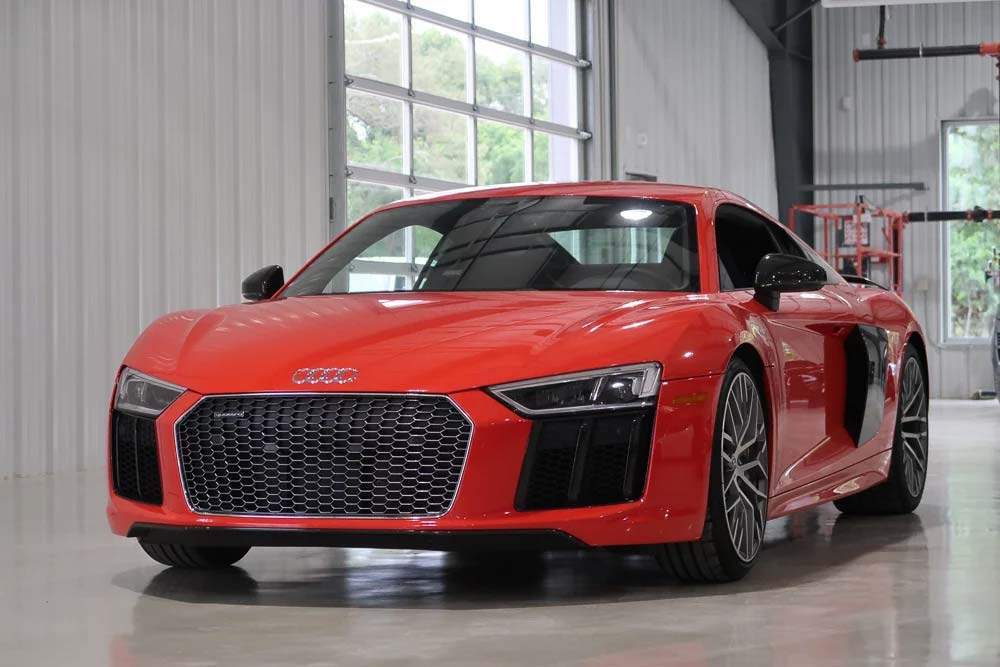 2015 Audi R8 for sale in Boerne, Texas. Highlighted by its iconic styling and unusually accessible performance, the 2015 Audi R8 maintains its special status as a midengine exotic sports car that you can drive every day of the week.

Some exotic cars look amazing for a year or two, then appear as caricatures of themselves, pinned to a bygone era. That's not the case with the enduringly appealing Audi R8. Even eight years past the original debut, the 2015 R8 still rubberizes necks and inspires breathless social media posts. And from behind the wheel, it still cashes the check written by those daring looks. Think of the R8 as almost everything that Audi does well -- all-wheel drive, smooth and powerful engines, benchmark interiors -- distilled into one potent pill.

The R8 has some genuine Italian ancestry, sharing certain structural and mechanical elements with the dearly departed Lamborghini Gallardo, and those supercar genes are readily apparent as soon as you hit the open road. Boasting aluminum-intensive construction, with the engine located amidships and the all-wheel-drive system biased toward the rear, the R8 provides the kind of telepathic responsiveness one would expect from a smaller, more elemental sports car. Power flows from a high-revving V8 or V10, the latter sourced from Lamborghini, and the standard transmission is a throwback exposed-gate six-speed manual. For those who want the convenience of an automatic, the dual-clutch automated manual known as S tronic provides lightning-quick, perfectly executed shifts on demand (and better fuel economy to boot).

As enthralling as the R8 is to drive at a racetrack, we've always loved how it drives in mundane situations, too. Specifically, it offers decent ride comfort, exceptional outward visibility and comfortable seats, plus barely perceptible gearchanges with S tronic in automatic mode. It's a supercar you could easily drive every day, and that's not true of all contestants in this class. Of course, if you're considering the R8, chances are you've already got a daily driver or three, but it's nice to know the versatility's there if you want it. 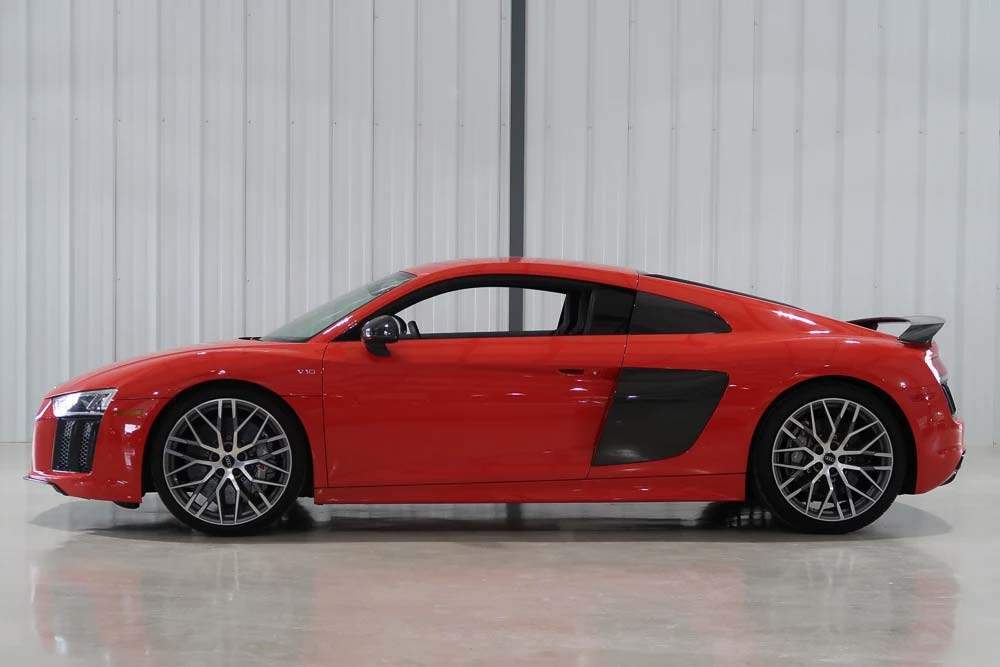 The 2015 Audi R8 V8 is powered by a 4.2-liter V8 mounted behind the passenger compartment that sends 430 hp and 317 pound-feet of torque to all four wheels. A six-speed manual transmission with an exposed-gate metal shifter is standard, while a seven-speed dual-clutch automated manual, known as S tronic, is optional and includes steering-wheel-mounted shift paddles. In Edmunds performance testing, the R8 V8 Coupe with the six-speed manual went from zero to 60 mph in 4.5 seconds. EPA-estimated fuel economy for both body styles rings in at 14 mpg combined (11 city/20 highway) with the manual and 17 mpg combined (14/23) with S tronic.

Finally, the R8 V10 Competition (coupe only) tops the range with 570 hp and 398 lb-ft of torque. It is equipped exclusively with the S Tronic transmission, and Audi estimates that it will accelerate from zero to 60 mph in 3.2 seconds.

Standard safety equipment includes antilock disc brakes, stability control, side airbags and knee airbags. Front and rear parking sensors and a rearview camera are optional with the V8 and standard with the V10. An Audi R8s have comes to a stop from 60 mph between 104 and 106 feet. Meanwhile, a 2014 R8 V10 Plus with the carbon-ceramic brakes come to a halt in 106 feet. 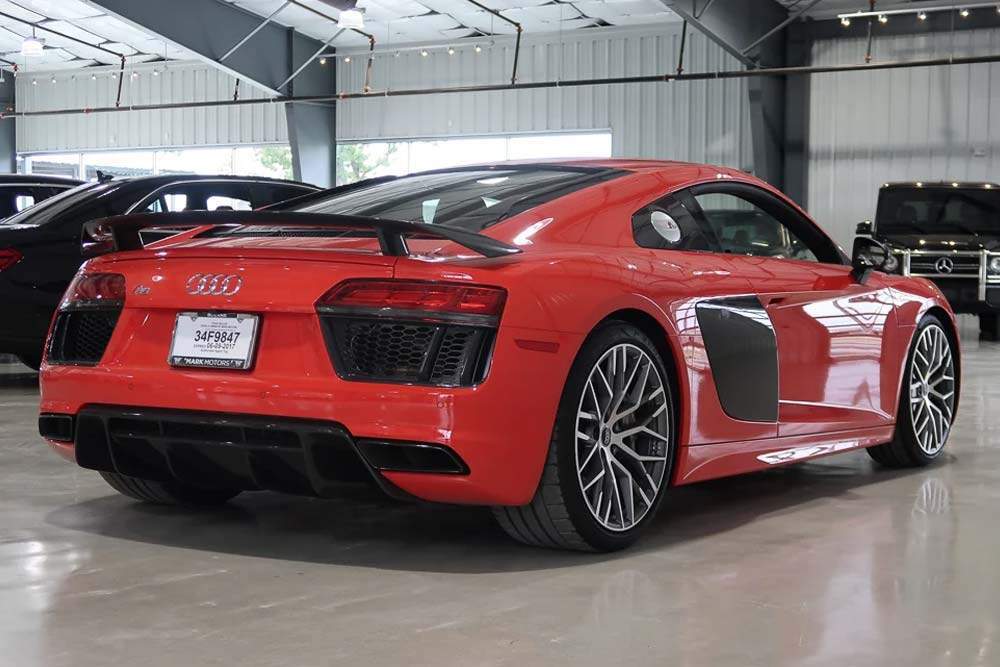 The R8 has a finely crafted cabin with top-notch materials. The lightweight seats are comfortable for long-distance travel, and the driving position suits a wide range of people -- not a given in this class. We like the center stack's elegant swoop away from the driver. Additionally, the navigation and audio controls are operated by a rather finicky dash-mounted MMI knob and a constellation of buttons located beneath the display screen.

The Spyder models' convertible soft top can be operated at speeds up to 31 mph. It takes roughly 20 seconds in either direction to transform. The Spyder's thermal-resistant leather seats effectively lower surface temperature, which is a nice attribute for open-top motoring.

The 2015 Audi R8 rides firmly but assuredly thanks to its adaptive suspension. By exotic-car standards it's a remarkably comfortable daily driver. Low seating height notwithstanding, outward visibility in the R8 is especially good in all directions. On twisting roads, the R8's exquisitely refined power, quick reflexes and heroic grip conspire to make this 3,600-pound supercar feel as nimble as a lightweight roadster.

Speaking of power, the R8 V10 adds an appreciable amount, as well as a uniquely racy soundtrack. But even the V8 is one of the best-sounding and most tractable engines we've experienced. The dual-clutch S tronic automated manual is admirably quick and easy to use around town. The classic manual shifter is so rewarding to row, though, that you're going to have a hard time turning it down. 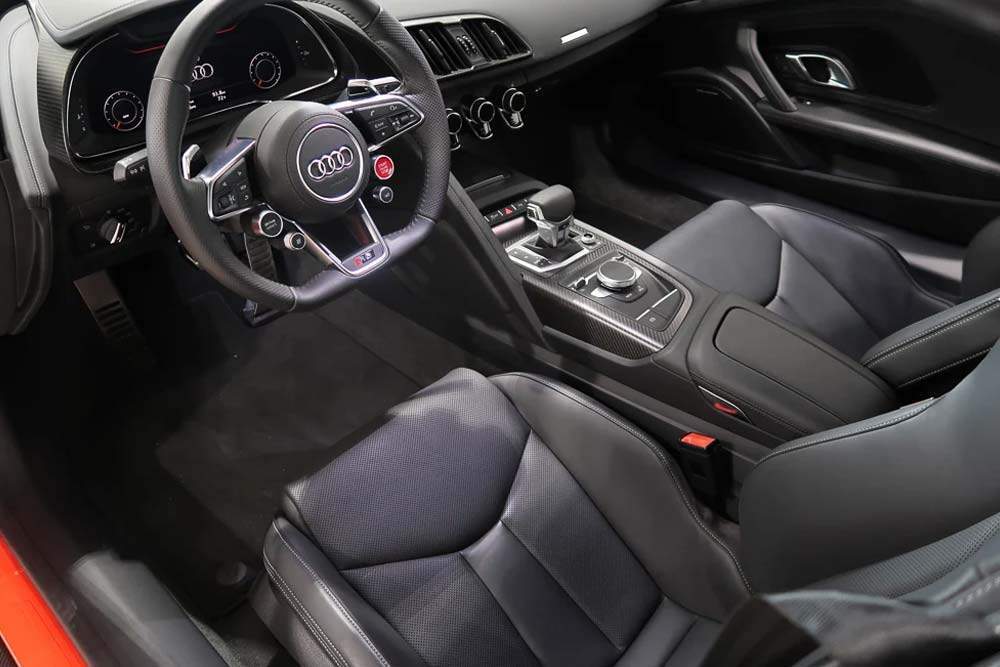 The 2015 Audi R8 is a two-seat midengine exotic supercar available in Coupe and Spyder (convertible) body styles. The Spyder models are equipped similarly to their Coupe counterparts, but they add a power-operated soft top and a retractable rear window that doubles as a wind deflector. There are five available trim levels: V8, V10, the Coupe-only V10 Plus and V10 Competition, and the Spyder-only V10 Carbon.

Options on the V8 start with a DVD-based (yes, really) navigation system, an iPod interface (which deletes the CD changer) and a 12-speaker Bang & Olufsen sound system. Extended premium leather trim is also available, optionally with diamond stitching and a faux-suede headliner (the latter is also a stand-alone option). A parking system adds front and rear parking sensors and a rearview camera. Red brake calipers can be specified unless you want the optional carbon-ceramic brakes, whose calipers only come in gray. The Black Optic package adds titanium-finish 19-inch wheels and blacked-out exterior details (including the exhaust tips).

The V10 trim gets different suspension tuning, different wheels, the parking system and a handful of the V8's optional interior luxuries as standard (premium leather upholstery, faux-suede headliner, navigation and Bang & Olufsen audio). The V10 Carbon (Spyder-only) features a higher-output version of the V10 engine, the ceramic brake package, and carbon-fiber trim on the door sills, engine compartment, spoiler, diffuser and mirror housings. Otherwise, the V10 shares the V8's options list with the exception of an exclusive sport exhaust for S tronic models.

The coupe-only V10 Plus also features the higher-output engine, a front diffuser, the carbon-ceramic brakes and an abundance of carbon-fiber trim pieces. But for further weight savings, it has a smaller fuel tank (19.8 gallons), reverts to the base stereo and deletes the adaptive suspension, heated power-folding mirrors and power seats (though power lumbar is still included). The power seats and upgraded stereo can be added back at extra cost, and the leather upgrades are also offered on V10 Plus, as is the sport exhaust (S tronic only).

The limited-edition R8 Competition (coupe only) offers the highest-output V10 available in the R8 lineup along with several aesthetic exterior trim upgrades that include matte-carbon "sideblades," sport exhaust and the aforementioned red brake calipers.